I'm writing to update you on "What Summer Brings"......our new album and the upcoming tour.

First, we've just added another show to the fall Netherlands tour. November 7th at Roepaen Podium in Ottersum. Tickets can be purchased here.

We're excited to return to Holland for this theater tour. We look forward to debuting lots of new songs from "What Summer Brings," and also playing all the favorites. We're bringing the full band, and we're going to break it down AND rock it out. It's gonna be great!

The new album has been a true labor of love. The fact that it's been 7 years since the last studio album has allowed us to store up lots of new ideas, and mature in our writing and production....and it's made us so hungry to get back in the studio and create....and explore. There'll be some fresh new sounds on the album, but they'll be accompanied by familiar sounding "signature" Venice songs. Co-writing with longtime Venice collaborator, John Vester, as well as our more recent collaborator, Charlie Vaughn, has added another dimension to the writing.

The last two weeks have been amazingly productive. We've tracked 18 of 20 songs with drums and bass. The world famous Mark Harris on bass for most of them, accompanied by fan favorites Dann Gillen and Jamie Wollam on drums.....what a privilege to work with these true pros and dear friends. And we've already recorded lead vocals on 80% of the songs. Vocals are a priority right now, due to the 3 other Lennon boys heading back out with The Wall tour in a couple of weeks. There's a new confidence and maturity in Mark's and Kipp's lead vocals.....We were actually laughing that this late in our careers, we feel like we're finally figuring things out.....It's never too late to learn and grow...And such an honor for me to produce and engineer such talented singers.

Since so many of you have asked for a taste of "What Summer Brings," we'll be sharing some audio snippets of what's to come....just to wet your appetite. We're not quite ready to put that out yet, but keep your eyes on Facebook and Venice Central, because you never know when we might suddenly throw that out there. We'll also notify you via e-mail blast.

Well, I guess that's it for now I gotta get back to the studio....Pat's gonna lay down some guitar on the new songs. 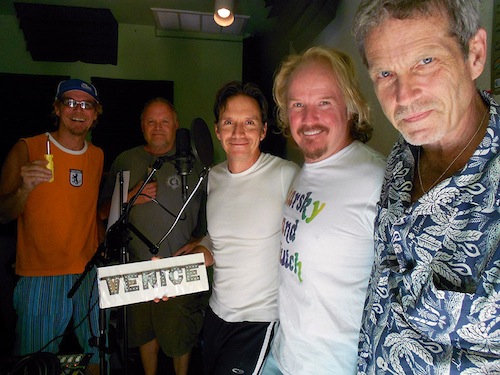